A very warm welcome to Class 6. We have many wonderful opportunities throughout the year which are specific to Year 6, Pioneers being the most famous!!!

We work hard and enjoy our time being at the top of the school, readying ourselves for the next adventure at secondary school.

In Year 6, we try to ready our children for their next stage of their education. As such they will have a separate RE teacher on a Thursday afternoon and PE teacher on a Friday.

Please send your child into school wearing full PE kit on a Friday. 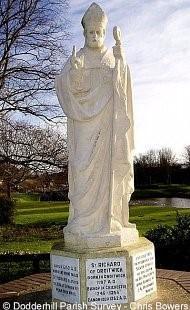 Richard was born in Droitwich in 1197 and studied at Oxford University where he became a friend of his tutor, Edmund Rich, who in 1236, when he was Archbishop of Canterbury, appointed Richard as Chancellor of the Province of Canterbury. They had to flee to Europe after a quarrel with Henry III. Edmund died and Richard was ordained by the Bishop of Orleans. He returned to Kent as a parish priest and was later named as Bishop of Chichester in 1244.

During one of his return visits to Droitwich, sometime between 1247 and 1249, his episcopal blessing on the dried up brine springs miraculously caused them to flow again, much to the relief of the town. After a life of poverty and humility, Richard died on 3rd April 1253.

Lots of schools use tests at all stages of their work. For the most part, these are part of a normal classroom routine, and support teachers’ assessment. However, at certain stages of schooling, there are also national tests which must be taken by all children in state schools.

New tests were produced for the summer of 2016 onwards to assess work from the new curriculum. Often informally known as ‘SATs’, the National Curriculum Tests are compulsory for children at the end of  Year 6.

The new National Curriculum Tests for children in Year 6 take place each summer from 2016. Tests for Year 6 pupils are sent away for marking, and results are reported to schools and parents at the end of the year.

Where previously these tests – and other teacher assessments – were graded in levels (normally numbering between Level 1 and Level 6 in primary school), from 2016 the tests results are reported as a scaled score, with a score of 100 representing the expected level.